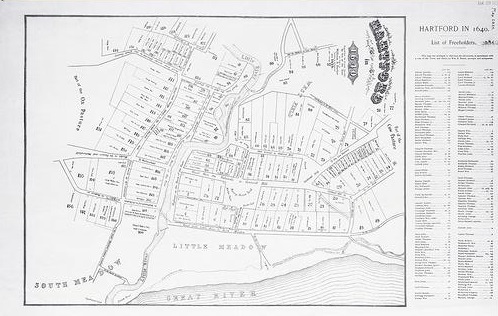 By the time white settlers arrived in Connecticut in the early 17th century, Native Americans had inhabited the area for thousands of years; indeed, it was the Algonquin word for “long tidal river,” quinnetukut, that gave the colony (and later the state) its name.

Various tribes, all part of the loose Algonquin confederation, lived in or around present-day Hartford. These included the Podunks, mostly east of the Connecticut River; the Poquonocks, north and west of Hartford; the Massacoes, in the Granby-Simsbury area; the Tunxis tribe, in West Hartford and Farmington; the Wangunks, to the south; and the Saukiogs in Hartford itself. Saukiog, or as it is sometimes spelled, Sickaog or Suckiaug, was the Native American name for Hartford.

The first whites known to have explored the area were the Dutch, under Adriaen Block, who sailed up the Connecticut in 1614. By the early 1620s, Dutch fur traders had established a fort in Saukiog that they called “House of Hope,” in a location still known as Dutch point.

In the meantime, in England, a Puritan minister named Thomas Hooker was attracting the attention of the Archbishop of Canterbury, who fought fiercely against Puritan attempts to reform the established English Church. Eventually, Hooker was forced to leave England for Holland, and in 1633 came to Massachusetts to escape more persecution. There, he became the first minister of the church at Newtown, now known as Cambridge. His assistant was Samuel Stone, who had been born in Hertford (or, as it was usually spelled then, Hartford), north of London.

Finding the Boston area too cramped, Thomas Hooker and about 100 people from his congregation, along with as many cattle, left Massachusetts in 1635 and traveled to Connecticut, where they started a settlement to the north of the Dutch. They originally called their new home Newtown, but changed it to Hartford, probably at the suggestion of Samuel Stone.

The Native Americans in the area had generally good relations with the white settlers, at least in part because they sought protection from two warlike tribes, the Mohawks to the west and the Pequots to the east.

Because it lay outside the authority of the Massachusetts Bay Colony, the Hartford assemblage needed its own authority to govern. In 1638, the General Court (legislative body), meeting in Hartford, adopted the Fundamental Orders, often described as America's first written constitution and the reason why Connecticut's official nickname is the Constitution State. The Orders, inspired in part by Hooker’s assertion in a sermon that “the foundation of authority is laid, firstly, in the free consent of the people,” set up an independent government and established Connecticut as a commonwealth.